Racing operates on the Roodee 15 days between May to September, but Chester Racecourse is in fact a 365 day a year operation, attracts almost 500,000 visitors annually at raceday fixtures and non-raceday events. Recognised as a leader in its field, Chester Racecourse are consistenly pushing boundaries to ensure the racecourse product delivers the optimum experience and opportunities for visiting horsemen and the general public. The racecourse has consistenly been awarded the Gold Standard Award by the Racehorse Owners Association (ROA), since the award's inception in 2008 and was awarded the prestigious Large Racecourse of the Year Award, when it launched in 2015. Chester Racecourse was the first racecourse to launch its own in-house gaming division; Chester Bet, replacing the Tote on course from 2012.

A recent Economic Impact Study reported that Chester Race Company generates £54.1 million of expenditure per annum in the local economy and supports some 974 gross Full Time Equivalent jobs; 24% of employment in the recreation sector alone.

Chester Race Company also operates its own provision of on-course catering via its Horseradish brand; delivering year-round events, race meetings and conference and banqueting at Bangor-on-Dee and Chester Racecourses, Chester Town Hall, Speke Hall and numerous other affiliate venues and bespoke events throughout the North-West and further afield.

A history of Chester Racecourse

Established in 1539, Chester is the oldest racecourse still in operation in Great Britain, if not the world.

During the Roman occupation of Britain, most of the modern sixty-five-acre site of Chester Racecourse was not even dry land. In fact, it was an important harbour on the river Dee, which supplied the Roman garrison of Deva, (now the city centre section of modern day Chester), and for those interested in ancient history, some of the anchor stones used at the Roman port can still be observed at the current racecourse site.

After the departure of the Romans, and following several centuries of river action, silt produced an island in the river, and a stone cross was built on the island. The current name for Chester Racecourse of - The Roodee is a mixture of the Norse and Saxon languages and means The Island of the Cross.

By the early middle ages the construction of a weir system on the river caused much larger quantities of silt to be deposited, and the original Roodee was converted into a riverside meadow, and this lay the foundation for the area to be eventually turned into a racecourse.

It is worth noting, Chester has three major footnotes in the history of modern era horse racing. The first recorded prize given to the winner of a horse race, a hand painted wooden bowl, was presented to the winner of a horse race at a Chester fair in 1512. The second footnote revolves around Henry Gee, who became mayor of Chester in 1539. One of the many reforms Gee introduced, was an annual horse race meeting on the Roodee. The original prize of a silver bell was presented to the winning owner of, “The horse that ran before all others”. The start date of this event makes Chester Racecourse the oldest continuous site of horse racing in the British Isles. Finally, due to his involvement and love of horse racing, Henry Gee’s name became synonymous with race horses, as today they are still often called, ‘gee gees’. By 1817, the vast crowds attracted to the annual Chester races made it economically viable to build the first grandstand. This proved to be an unqualified success, as the tight nature of the track enabled race goers to watch and enjoy every facet of the racing action.

During the nineteenth century, Chester races attracted: “The most perfect mix of society from all over the British Isles”. This is a proud tradition the racecourse continues up to the present day.  In recent years, Chester has extended its racing programme, staging fifteen days of competitive and quality racing. However, the prime event remains the three-day festival meeting in early May, and with historic races like the Chester Cup, the Chester Vase, the Ormonde Stakes, the Cheshire Oaks, and the Dee Stakes, this three-day meeting attracts top racehorses from Britain, Ireland and sometimes France. A racecourse not only steeped in history, but also renowned for its style, innovative nature and of course, inimitable racetrack. There are few more thrilling sights in British Racing than the horses thundering into the final furlong at Chester and much like the tight turns of the 1 mile, 1 furlong course and participants who race the hallowed turf, the team at Chester move quickly, stay balanced and tight to the curve. In recent years, the unique setting of the Roodee has grown to encompass many purpose-built facilities from which to enjoy a raceday at Chester, serviced by an award-winning team and accompanied by mouth-watering menus and an extensive selection of wines and Champagnes. This winning combination, culminating in the ‘Chester experience’, is what we are famed for.

Jockeys, trainers and racegoers, whatever the result, all return home with a smile on their face. 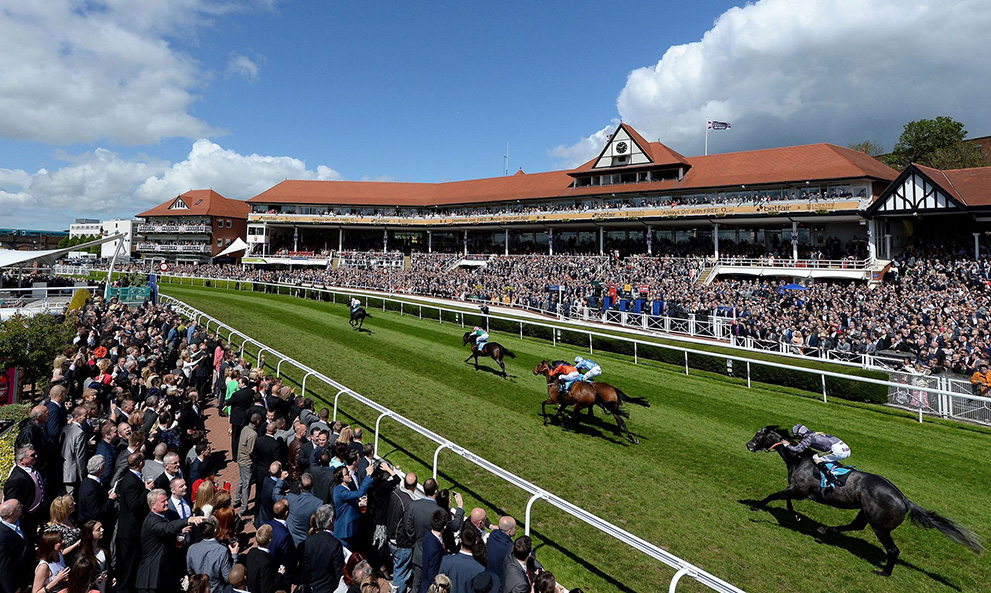