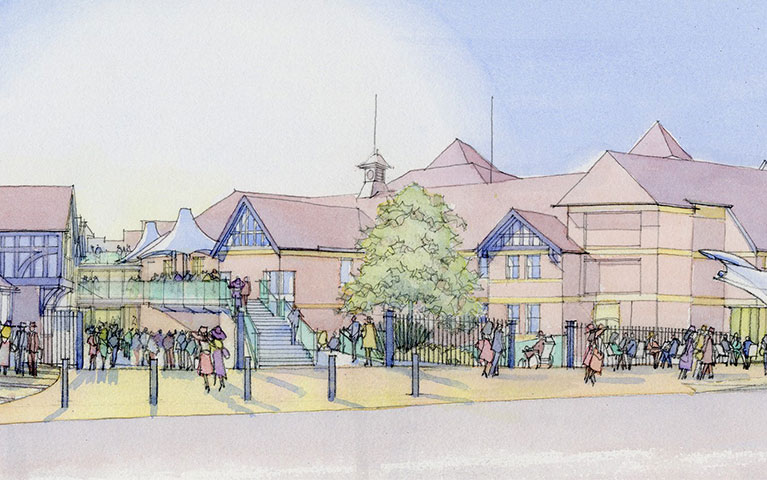 In early 2017, Chester Race Company took the decision to vacate its offices to the fourth floor of Chester’s HQ Building. This decision to relocate meant staff could work collectively in one open plan space, addressing efficiencies, logistics and communication requirements. Overlooking the racecourse and with excellent proximity to the site, this was seen as the ideal move and has proved to be successful to date.

In May 2017 the Race Company took over the Watergate Inn, having purchased the property from Enterprise Inns in 2016. The newly acquired premises served as a meeting point for racegoers throughout the 2017 season, as well as an additional space from which to serve customers on racedays.

Vacating the Racecourse site paved the way for improvement works to take place and once the 2017 season concluded, work began on the main entrance to the Racecourse, in time for 2018’s season start. Utilising the skills of the Race Company’s in-house operational team, this project is aimed at improving the entrance and approach to the County Stand and making use of the now vacant office buildings. Work is well underway and already the existing entrance gates and railings on the boundary of Watergate Square have been removed and the Box Office and IT Office complex demolished.

This area will be re-modelled and landscaped to form a more attractive and accessible approach to the main entrance, County Stand and surrounding areas. Additionally, a new staircase will link to the existing decked area outside the County Long Room and provide a welcoming entrance into the Long Room.

The Box Office will be relocated to the ground floor of the former offices, whilst the first floor will be converted into a bar with a new roof that reflects the character of the original building. This new bar will be accessible year-round and will provide welcome views of the City Walls.

In addition to these on-going works, a planning application has been submitted to Cheshire West and Chester Council in respect of the Watergate Inn. The proposal involves the demolition of the pub which will be replaced with a new public entrance to the County enclosure through formal landscape and a feature canopy. The Watergate Square will be re-surfaced and pedestrianised with limited vehicular access.

The improvements will bring considerable benefits on racedays and throughout the year and act as a pre-cursor to the Race Company’s longer-term strategy and delivery of its ‘Masterplan 2018’.

The Race Company has recently announced the masterplan strategy to its shareholders and will hold a public exhibition of the proposals at the racecourse this Spring. The Race Company will endeavour to ensure key stakeholders play an integral part in the consultation and planning processes and the general public are also provided with an opportunity to view the plans and express their views. Further information regarding the public exhibition will be issued in due course.